Why is it that life always either stops at a standstill or races so that I’m hanging on for dear life? When I want to keep rushing into things, it makes me rest and slow down. When I want to just lay around doing nothing, it suddenly opens all the doors. The last month has been a downhill race, as things suddenly sped up and everything started happening. This little snowball of me having a life at home just sleeping, eating, and watching kdramas never imagined that it would end up halfway down the mountain, and picking up all sorts of things left and right as it went. It all started when an acquaintance told my mom that their pharmacy was hiring. Then I reconnected with her and met her two adorably energetic grandkids who killed me a few times, loved to dance, and always had me read each book twice. Then suddenly, I had an interview in a few days after. And voila, I had a part-time job for the next little while. And volunteering is getting set up as well to happen in the next little while too. So here I am, wondering if I had inadvertently rolled a snowball that was too big for me to handle.

I’m half excited for the upcoming months and what new connections and experiences will bring, but also half nervous to suddenly be at the doorway to so many “unknowns”. Am I ready for all this? Nope. Hardly. But again, when have I ever been ready for the things life has thrown mercilessly at me? All I can do now is admire the snowy scenery on the way and survive it. Cuz you never know if it’ll roll to a stop or crash. And the snowball you made in your palm can either become a snowman or an avalanche. Isn’t this the beauty of life?

So re: the last post, the staying up was totally worth it watching Canada win gold 3-0!! I ended up just watching it on my iPhone by FaceTime on my friend’s TV because streaming it on the internet was behind the real time by half a minute. After the win, I went outside (6:30 am) and made a tiny snowman because…it was snowing!!!

andddd its mid-February!! And it’s not even the usually snow-that-melts-once-it-hits-the-ground but the snow-that-stays-and-is-snowman-material! Of course,  I just HAD to build a snowman! I haven’t built one in years! The last time I built a legit snowman was probably Grade 7. Snow days were all the rage back then. We made a snow slide and all in the front yard of the school as well! When I told my dad I wanted to build a snowman, his reaction was sort of like “YOU’RE AN ADULT”. But through some insisting, I convinced him to come out with me, and that you’re never too old to build a snowman, because you aren’t! But I have to say one thing…I’m sore all over after building one snowman, don’t know how we did it in elementary school! My muscles! Anyways, I tried to build Olaf from Frozen *cue: Do you want to build a snowman?* and somewhat succeeded while failing? His tummy totally destroyed his feet so his bottom half is like a traditional snowman. His face looks pretty legit, except…it’s kind of tilted up (because it was easier to mold it standing straight and we didn’t make him tall enough) so he looks funny face-on. Kind of like a dog with huge lips. But all in all, it was a fun hour well spent in the freezing cold with my dad! 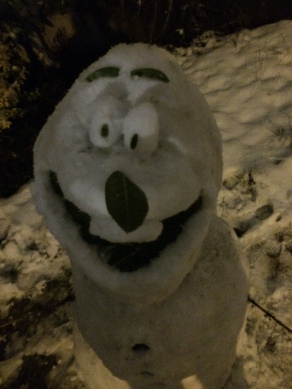 Now back to the snow and Christmas-esque landscape. The snow is so beautiful to watch. Coming down, just knowing that each of those million of snowflakes are unique. Mind-boggling! It’s the perfect distraction for the incoming stress of midterms. Sigh, if only the holidays and winter break was around the corner and appearing as suddenly as the weather! But I’m so glad it’s snowing and not raining. I don’t have to get wet, and it looks pretty! It’s definitely worth the freezing cold temperature. I just hope that the cold landscape doesn’t bring on the winter blues again. It’s bad enough already without extra blues!

My collection of thoughts: