So it’s been about two months since I got my second tattoo, and many many more months since I had been thinking of getting it. I still have the realism collage tattoo idea swimming around, but thought that I might want to wait until more of my life had passed, or some other monumental thing had happened. This one took much more time to sit on, wondering if I should ask my dad to write me a card for my birthday or ask him to rewrite the phrase in his best writing, etc. But in the end, I thought that the authenticity of the feelings and emotions behind every word at that moment back in time would be lost.

So why these words out of the whole page in my graduation gift? Why not the standard “I love you” written in his handwriting? It’s because I’ve come to realize that when I saw these words, it’s as if all the heavy stones I had placed upon my own shoulders disappeared. I had grown up hearing my dad say that all he needed from me was for me to do my “personal best”. However, the way that I interpreted those words were that I could always work harder and push those boundaries to make my “personal best” even “better”. Instead of an encouraging statement, it became the chains on my ankle, taking away my feelings of accomplishment every time something was finished. My goal in life had become “to make my parents proud”, because I had felt that in disappointing myself every time, I was also a disappointment to them. It didn’t help that all my life, we had butted heads on pretty much every single thing I chose to do.

In addition, there was my headache, which they could not understand. It wasn’t until last year when they started to see that it was more than just a headache like they would get, or a pain in their joints that come and go. That I had been living in constant, never-remitting pain in my head for the last 5 (almost 6) years. And they had finally started to understand how it added an extra level of difficulty for simple, everyday things, so how much harder was it for me to go through with my pharmacy degree and become a pharmacist with it.

So for them to acknowledge 1) my headache and all the difficulties that it challenged me with, and that 2) they were proud of me as always, made me feel that no matter what happens from now on, I could be content. It also made me feel less alone in my battles. Knowing that they were cheering me on from behind, that I was already a winner in their eyes, takes off that burden of winning the competition against myself for their sake. Contentment – a state of satisfaction. To be able to experience this emotion after a decade of working myself to pieces to strive that much further was foreign, but made all the sweat and tears worth it. It doesn’t mean that I’ll stop working hard, its just that I won’t do everything like my life depended on it. All my future successes can just be a bonus (well until I find a new goal to go crazy about…but that’s a whole other topic). 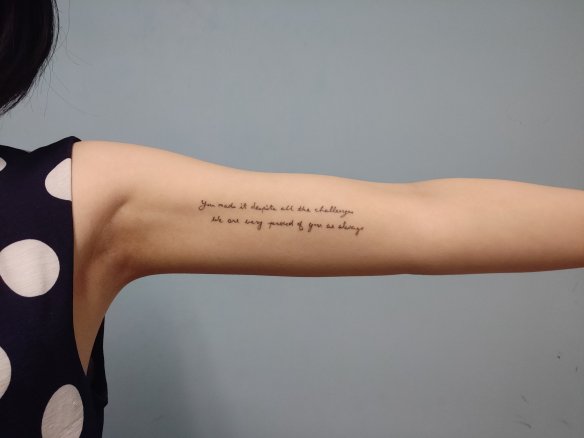 The original copy in my graduation gift

So even though I’ve gone through crazy life changes these past weeks, there’s some things that I realized will never change, and I’ve come to realize that that’s okay. My beliefs won’t change, and that keeps me from changing my actions. To me, family is still the most important thing that I’m willing to sacrifice anything and everything for. Instead of throwing it aside to avoid being hurt, I’m still going headfirst into it and giving it my all. I’m still willing to voluntarily be my brother’s food-delivery-man. Just because I love him no matter what. No matter how he may look down on me or perceive me, that won’t change how I myself perceives him. I’m willing to spend as much of my spare time with my parents because they’re forever my parents. There will never be a day when I can finish repaying their love for bringing me up and giving me all their love. And it’s okay if it’s too hard for them to change. I guess I’ve reached the place where I’m learning to settle for their personal bests and my personal bests. They’re trying their best and that’s all I need. No one is perfect. Heck, I’m far from perfect myself. But the journey in trying is all that matters. Seeing them try to hold their tongue and see me as an adult, that’s enough. Seeing them give me the space to breathe that I longed for, that’s enough. Seeing them actually listen to my ideas and not shooting down my every thought, that’s enough.

Family has always been so, so, so important for me. Perhaps I brought it upon myself more hurt than I should have because of trying too hard to make my dream “family” come true. But I don’t want to settle for less than that. Instead, I’m learning to see how our broken pieces make a beautiful and whole picture. And I’m going to work my butt off like always to build this complicated puzzle. Like my lock screen reminds me all the time: Keep going. The most difficult roads often lead to beautiful destinations. And my background says, “Yes, it’s going to be hard, but hard is not impossible”. This not only applies to work and life, but relationships as well. Being in a family is essentially a lifelong group project (which I hated in university). We’re so different, but as long as we put the effort in, we can use our strengths to complete their weaknesses, and make a dream team. We might not get our choice of group partners, and definitely not family, but its our choice for our effort and input. So my choice is always going to be to give that 110% effort and as long as they’re putting their 100% effort, that’s okay. I’m content.

My collection of thoughts: